This site uses cookies to provide services, customize ads, and analyse traffic. By using this site you agree with our use of cookies. More information

The first type of transport in the history of transport in České Budějovice was a horse-drawn railway. Its father was František Josef Gerstner and his son František Antonín who got the privilege of constructing it in 1824.

This year was a year of the large anniversary - the celebration of 100 years of the establishment of the MHD. At this occasion the Internet presentation of the company was changed considerably bringing a lot of useful links and information, including the connection finder and information on bus timetables. The map of MHD lines also went through the large innovation.

In June 2009, the book called "100 Years of City Transport System in České Budějovice in 1909-2009" was published at the occasion of this significant anniversary. The information about this book is given in the separate section Book and Film.

The height of the 100-year anniversary was the spectacular Open Day on 13/06/2009 which was topped off with the historical vehicles parade.

Another big innovation was the introduction of the purchase of tickets by a mobile device. This project was implemented in cooperation with the Municipal Authority of České Budějovice which was the initiator of the project and takes patronage over it. 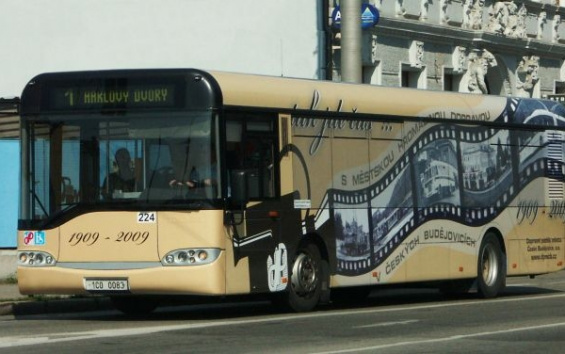 The Transport Company also provides special services. For this purpose, it owns one historical trolleybus ŠKODA 9Tr-HT which can be used upon a request for travelling along any part of the city with trolley wires. The vehicle is used for example during such events as the City Day, the Open Day in Budvar Brewery, the Open Day of Transport Company of České Budějovice and also for private celebration of the supporters of the public city transport. 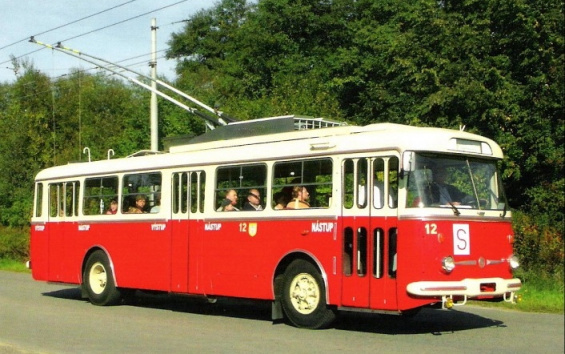 As every year, the significant financial resources of the company were used for the modernization of the vehicle fleet. There were purchased 2 short buses of Citelis Irisbus type and 2 buses Iveco Crossway LE and also 2 articulated buses Škoda 25Tr Irisbus. All buses are low-floor.

There was made a radical decision on selling the sums due from the passengers without valid tickets which had a considerably positive impact on the business result in 2008.

In this year, the vehicle fleet of the Transport Company was completed with 5 low-floor articulated trolleybuses Škoda 25Tr Irisbus and 6 low-floor articulated buses Irisbus Citelis. In the scope of the close cooperation with the Municipal Authority of České Budějovice, the new trolleybus route was constructed from housing estate Vltava to České Vrbné. There was also completed the construction of a modern car wash and paint shop on the premises of the bus depot. The night line network was completed with a new route to Pražské předměstí and to Nemanice, later also to Hodějovice. A new information office was opened in the transport-shopping centre Mercury. 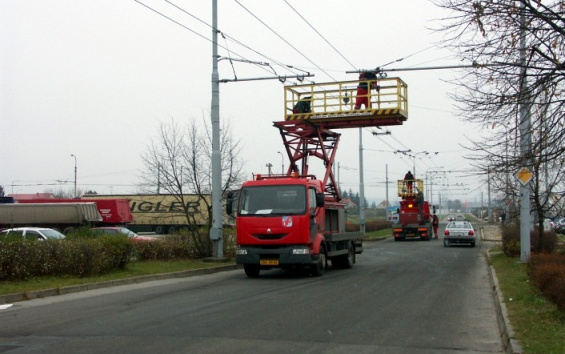 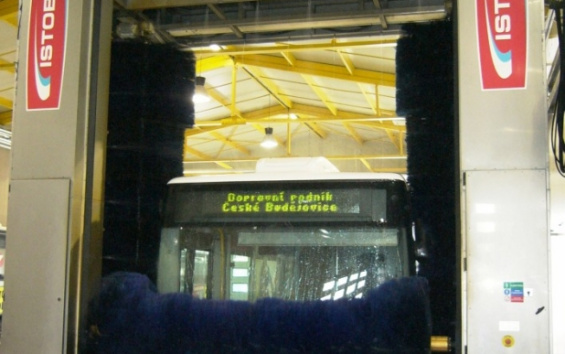 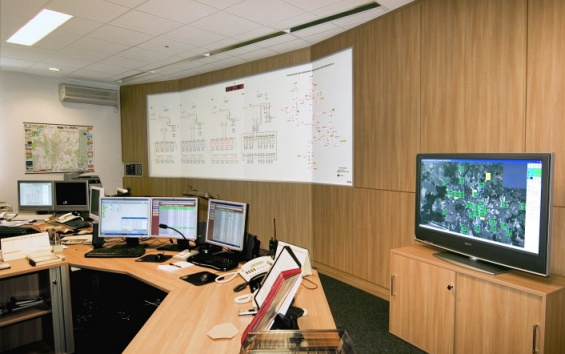 The crucial event of 2005 was the implementation of the project "We Travel Without Barriers" within the scope of which the Transport Company bought 2 low-floor articulated buses Irisbus Citelis - all of them with the platform for wheelchair users. Another significant event was the start of a new radio network for monitoring and controlling the public transport system. The event important in terms of operation was the implementation of the trolleybus network interconnection on the intersection Žižkova - Novohradská. 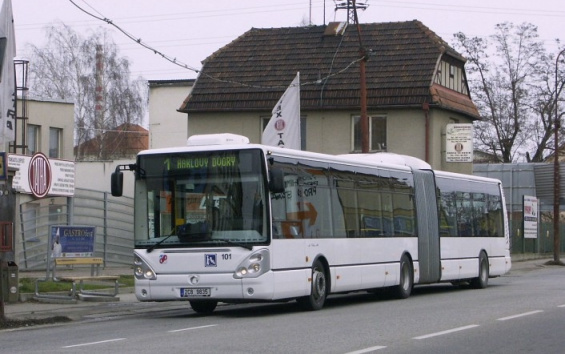 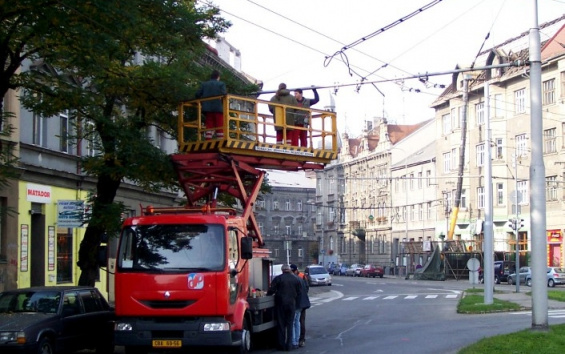 In 2003, the self-service petrol station was put into operation which was constructed on the grounds of the depot in Novohradská ulice according to the strictest ecological regulations. There was also put into operation the trolleybus route Pekárenská-Nadražní and the traction cable connection was extended to Suché Vrbné. 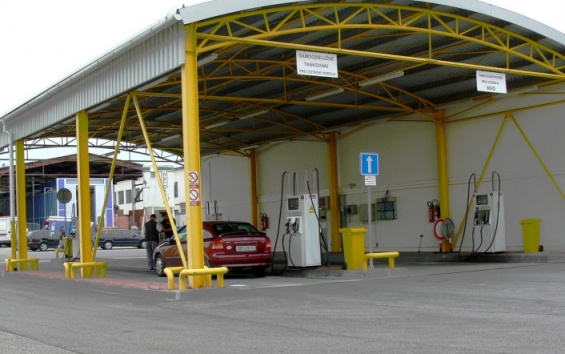 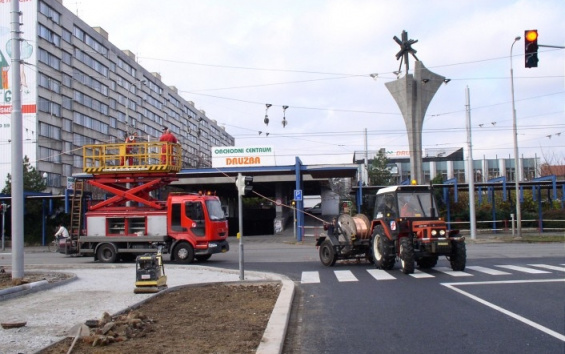 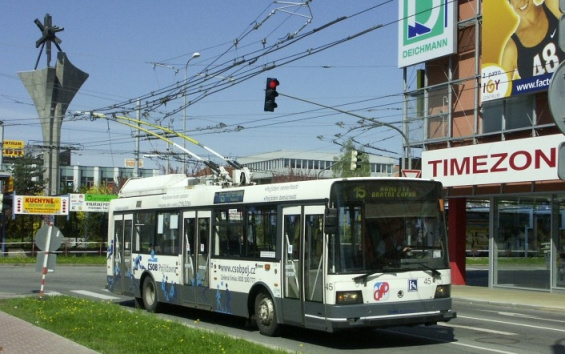 In 2001, the IDS (integrated transport system) was introduced - train + MDH + intercity buses. The Transport Company in České Budějovice participates in the IDS by line no. 104 which goes from České Budějovice through Hosín to Hluboká nad vltavou - the railway station. The line goes through entire Hluboká nad Vltavou where it works as the public transport at the time of higher demand for transport. 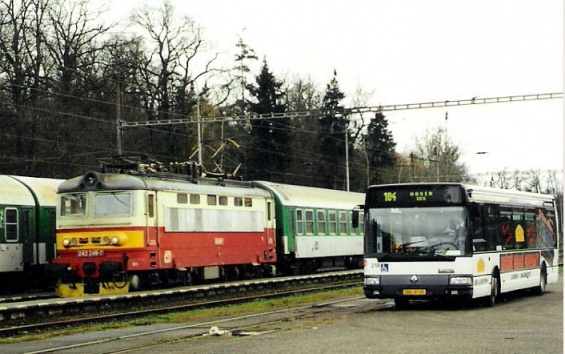 On 1 January 2000, the new check-in and information system was introduced. The vehicles were equipped with new on-board computers and ticket stamping machines. There was also put into operation the first complete information system for the blind in the Czech Republic.

Since 1 April 1999, some changes have been done such as the company logo or the information office arranged in Lannova třída to improve customer services.

Original logo of the Transport Company

New connecting trolleybus route to Strakonická ulice was put into operation on 13 April 1998. It is an important connection between Pražská třída and Čtyři Dvory. Since that year, low-floor vehicles have been purchased continuously - they facilitate travelling of not only disabled fellow citizens but also mothers with prams. 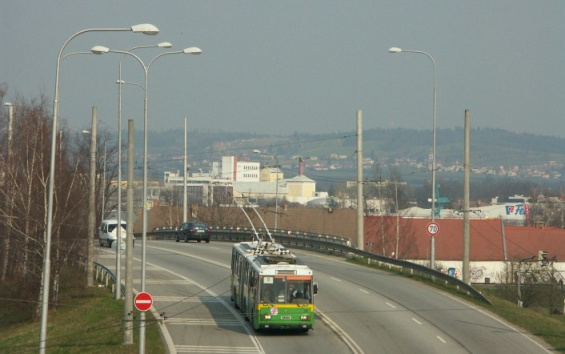 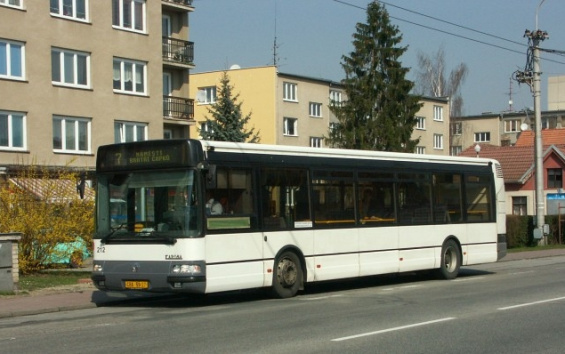 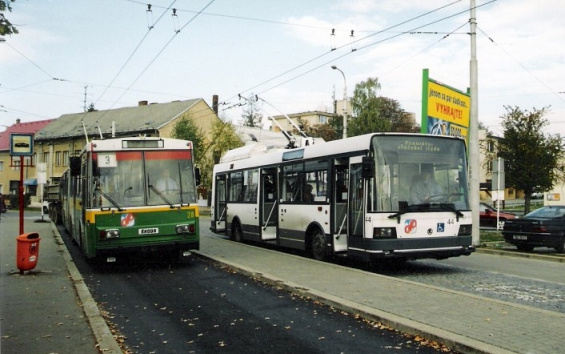 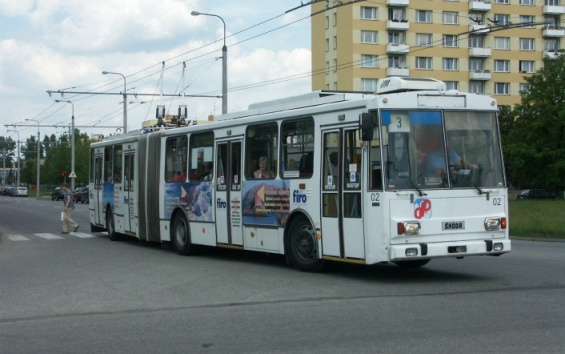 In June 1992, the trolleybus transport started operating on a route around the Central Cemetery, through Nemanice to Borek. In September of the same year, the second branch of the backbone route no. 2 was finished heading to Rožnov, so the first stage of the trolleybus network was closed. 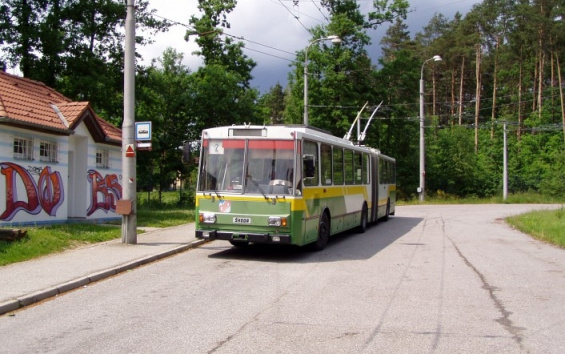 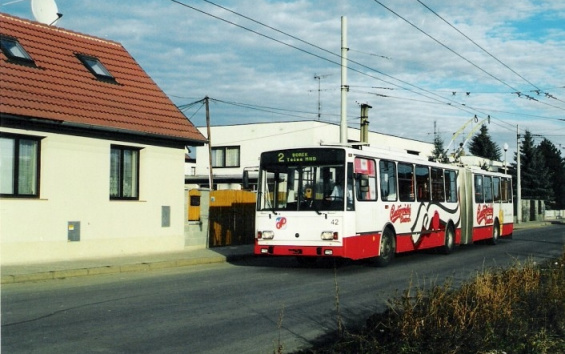 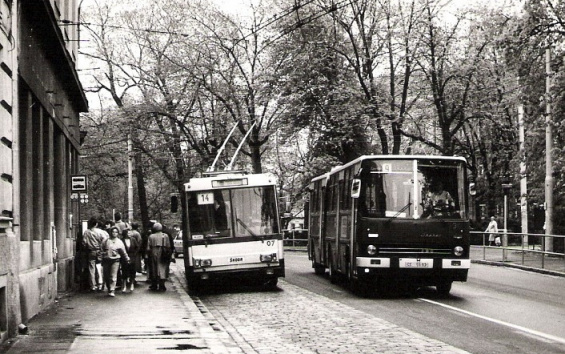 In the following years, the majority of original routes was renewed and the trolleybuses also reached other parts of the city, mainly new housing estates. The first connection was made between the Station and housing estate Máj and Vltava in the city part of Čtyři Dvory. The basis of the vehicle fleet became articulated trolleybuses ŠKODA 15Tr. The only vehicle can transport up to 150 passengers, so twice more than Vetra trolleybuses of 1948. 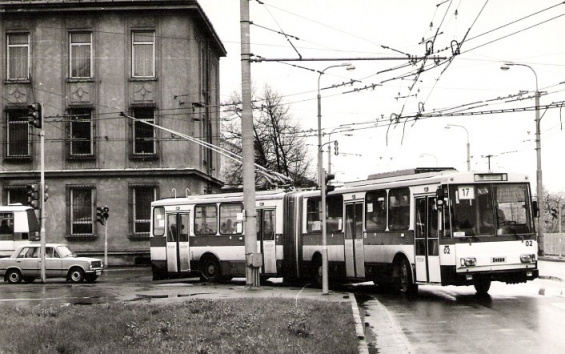 Čtyři Dvory – at the barracks 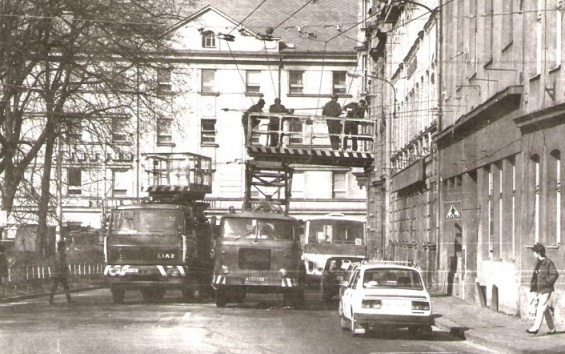 Bus transport kept on developing and after 1972, there were already 11 routes in České Budějovice with the total length of 57 km. Towards the end of 1988, the network of MHD (city public transport) achieved the length of two hundred kilometres.

In the 50s and 60s, trolleybus transport was the backbone of the city public transport.

Towards the end of the 60s, the operation of electrical traction was unadvisedly dampened and replaced with buses. On 24 September 1971, the trolleybuses "said goodbye" to České Budějovice in a special festive run. 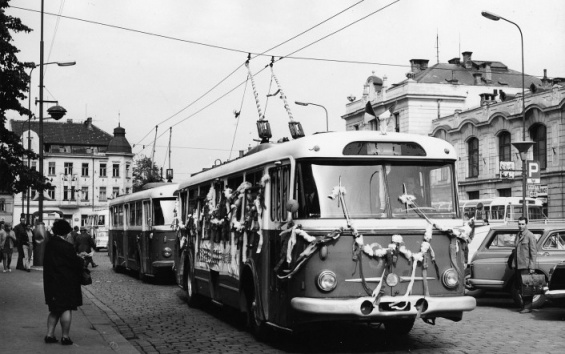 Over the course of years, the need of residents increased and in 1960, the bus transport was already operated on five routes with the total length of almost 30 km. Operation was provided with the buses of Škoda 706 RO and newer Škoda 706 RTo.

On 8 September 1951, the Transport Company introduced the first bus route to Mladý because the construction of the intended trolleybus route over there failed. During the first years, the transport on some less frequent routes was provided by small buses PRAGA. 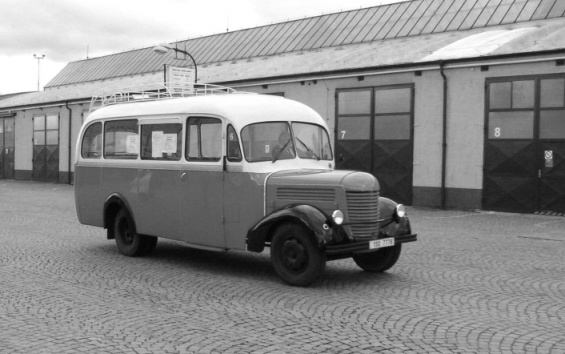 Since 1 January 1950, operation of the city transportation system in České Budějovice was excluded from the South Bohemian Power Plants and transferred to the newly established Transport Company. There was almost finished the construction of trolleybus lines. Tramway operation was finished on 1 March 1950 and trolleybuses started running on all four planned routes.

The works started in 1946 and the first trolleybus moved off to the new route on 28 October 1948. Tramways went for the last drive in 1950. South Bohemian Power Plants in České Budějovice constructed and gradually put into operation a trolleybus network. It was not slow and low-capacity transport means any more. The first route in České Budějovice was constructed to Čtyři Dvory (Four Yards). There were available the first three vehicles of Vetra type of French production equipped with the electrical equipment of ČKD. 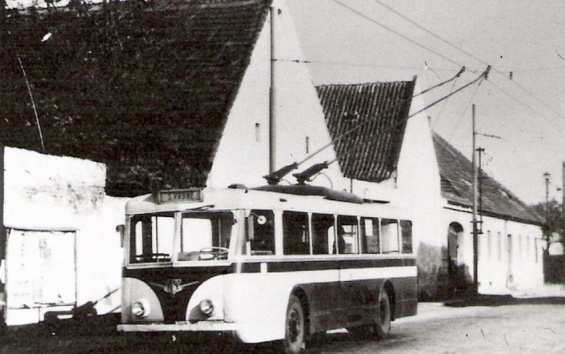 At the end of the World War II, bomb runs damaged the station and adjacent railway equipment, including tramway network which was repaired but it was already evident at that time, that it will not be sufficient for the increasing needs of the residents of České Budějovice. Modernization, or rather a new construction, would be finance-intensive, therefore the then administration authorities decided on the construction of simpler and more flexible trolleybus operation. 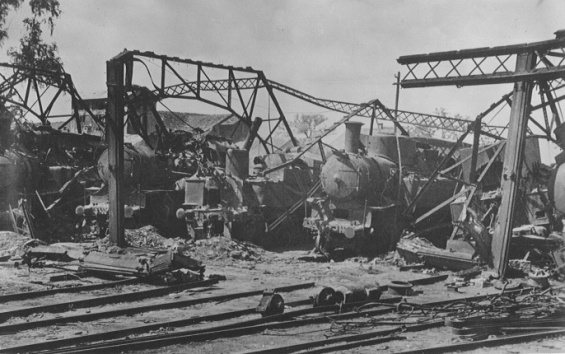 The only adjustment to the rail network was done in the city in 1936. From that year one line was operated between both suburbs (Pražské and Linecké) and the second one provided the connection from The Square to the Station through today's Žižkova třída from which the manipulation track turned to the depot (in the picture on the left). 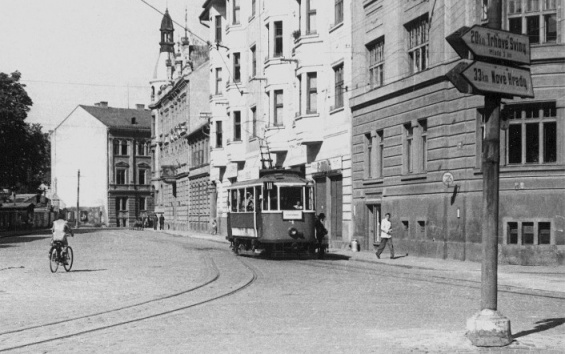 Tramway garages (in the picture on the right) were based next to Jihočeské elektrárny (South Bohemian Power Plants) which bought the České Budějovice street tram route in 1925. The Power Plants operated tramways until the end of their service in 1950. 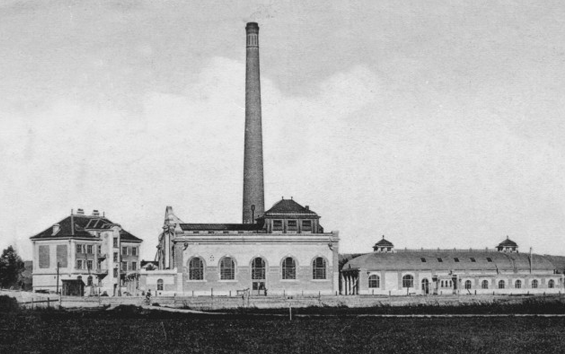 The second tramway route went to the then Linecké předměstí and was marked with the letter L. It started operating later after solving the small bearing capacity of the bridge over the Malše River. The passengers coming from the Station to Náměstí (The Square) got off and walked over the bridge. The tramway went empty over the bridge only twice a day. On the other side, another vehicle was ready to take the passengers. This system was in service from 16 April 1910 until 15 June 1916 because one year before that, a new steel bridge was built called Zlatý most (The Golden Bridge) standing there up to the present time. 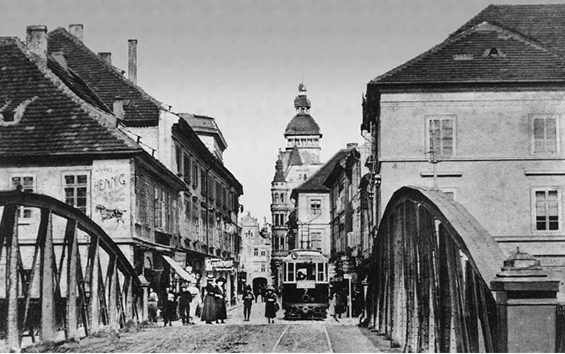 The bridge over the Malše River at the theatre

To provide the connection of the centre with the station - this was already provided in many cities by a city transport system. At that time, it was mostly street line - a tramway. It was similar in the south of Bohemia. The first route was put in operation in České Budějovice on 15 July 1909. The beginning was in the front of the then completely new spectacular building of the České Budějovice station built in Art Nouveau style. The rails headed to the Square and tramways went along the eastern and western part. Behind the bridge above Mlýnská stoka, the route went through the growing Pražské předměstí to Dělostřelecká kasárna. That is why the first route was marked with the letter P. 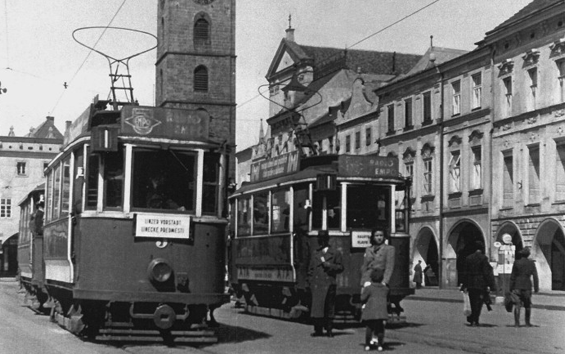 The town also needed the connection with the cemetery. However, the tramway could not go over two railway crossings due to railway regulations, so the passengers in České Budějovice could use a trolleybus from 27 October 1909. Their operation did not last long, though. Five years later, after the World War I started, the trolleybuses were confiscated for military purposes - they were modified and equipped with the combustion engine as a drive. 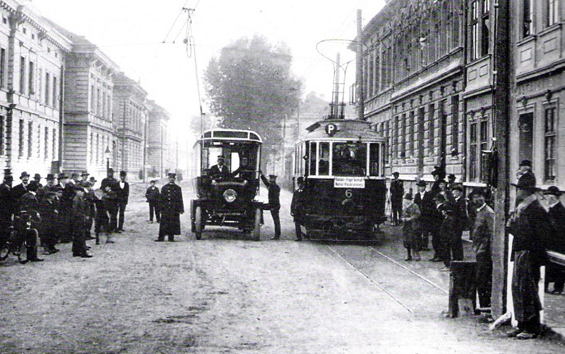 INFORMATION on public transport in your mobile phone. And no more missed connections!

THE TABLES CAN BE MOVED